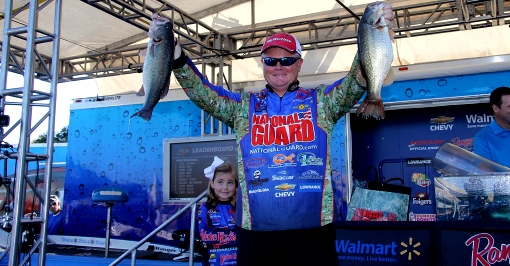 With daughter Hannah Grace peeking from behind, National Guard pro Mark Rose
shows off two of his winning fish. (Photo by David A. Brown)

DECATUR, Ala. – It's neither fair, nor respectful to other competitors to assume a tournament is "in the bag" just because a guy brings a huge lead into the final round. But Mark Rose, at least indirectly, justified any such murmurings with his dominant wire-to-wire win at the FLW Tour Open event on Wheeler Lake.

Ever the humble gentleman, Rose simply won't engage in that line of thinking. He'll thank God, his family and his sponsors and he'll let others draw their own conclusions. For him, it's simply a matter of being fortunate enough to fish his style of fishing during a period when Wheeler's bass were positioned well for it. Essentially, the fish are just starting to move into their fall transition of shallow migration, but the water's still on the warm side, so plenty of quality fish remain out deep. With a solid understanding of these seasonal patterns and significant experience at picking apart the deep bottoms of TVA impoundments, Rose was in his comfort zone and simply went to work methodically locating and engaging his finned opponents.

"I just felt comfortable out there – I just get in tune with it," he said. "It's a passion I have.

I really like it. I like it when I'm not catching anything because I'm trying to figure them out.

"I made a conscious effort about four of five years ago to get offshore. There's one of the best ledge fishermen in the country in the audience here – Randy Haynes (FLW competitor from Counce, Tenn.) – and I owe him a lot. He taught me a lot and spent a lot of time with me when I first started getting out, so I just have to thank him."

Now, here's where we justify that "dominant" statement. Day one, Rose weighs the event's biggest bag – a limit weighing 21-6 that gave him the lead he would never relinquish and a margin of 3-7. He followed on day two with 17-8 and expanded his advantage to 4-6. Day three yielded Rose's smallest bag of the tournament (15-10), but the way the other weights lined up, he found himself heading into the final day of competition with a big-time lead of 7-1.

Flash forward to the culmination of today's final weigh-in. After starting day four in third place, behind Blake Nick, Chevy pro Luke Clausen had moved up from third place to first with 58-12, while Nick slipped below Clausen with 57-2. Rose takes the stage with a three-day total of 54-8, so he's just 4-pounds, 8 ounces off the lead before yanking the first fish out of his bag.

Given his previous three averages, a single fish would've done it for him. But within this sincerely modest man beats the heart of a fierce competitor, so it came as no surprise when Mark Rose dropped 16-14 on the scales and blew this one out with a total weight of 71-6 and a massive winning margin of 12 pounds, 10 ounces.

Rose spent most of his time fishing about 15 miles from the tournament site and targeted fish in about 21-23 feet of water. Well familiar with the Tennessee River's extensive ledges, he knew he'd need to dial in the specific little sweet spots that would be most likely to attract quality fish. He found just such attraction over mussel beds – lively areas that typically hold baitfish. Rose said his Lowrance HDS-10 with StructureScan was essential to locating his quarry.

"That's my eyes and ears," he said. "I could not have done this without my electronics. Those mussel beds were the key, but every now and then, there were some stumps. I was trying to get around those stumps and if you touched a stump, a lot of times you'd get bit."

Rose had two main areas for most of the tournament, but a third spot opened up for him today when a fellow competitor who had been fishing there did not make the final-round cut. This spot produced a good flurry of early activity, but Rose rotated through all of his spots throughout the day.

"I just milked it for all it was worth today." He said. "I have to thank the people of this community. I had a lot of people out there watching me and they let me fish. I only had three little old spots and they left it alone and I appreciate that."

Rose used a variety of baits this week, but he caught most of his fish on a deep diving crankbait with a few stealth modifications for maximum depth. Today, the crankbait produced four of his keeper, with the fifth biting a Strike King football head jig with a Rage Craw trailer. Rose said he also caught fish on a Texas-rigged 10-inch worm and he also employed a Strike King jigging spoon to stimulate fish that played hard-to-get.

"The bigger fish wanted the crankbait more than anything else," he said. "For whatever reason, it takes time to figure out those bigger fish and I figured out that they wanted a crankbait."

Rose said that fishing his baits on 12-pound Seaguar fluorocarbon was essential for getting them to the target depth, while promoting longer casts and providing optimal durability.