How many depth finders do you really need? If you’ve never asked someone that question, you’ve probably never seen the boats of National Guard pro Mark Rose or his friend and three-time EverStart Series winner Randy Haynes of Counce, Tenn. Each rigs his boat with four 10-inch Lowrance HDS units. Heck, Rose even adds a fifth unit, a 5-incher, at the bow. 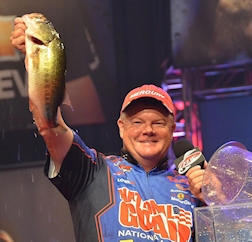 By now, you probably really are wondering how many depth finders they need. Before you get an answer, however, consider this: During the past six years, Rose and Haynes have combined to win more than $1 million, clinch 10 tournament titles and log 32 top 10s in FLW competitions. They credit their success to their ability to catch fish offshore. And electronics are a key tool for them to find and catch fish in all that water.

“About five years ago, I began noticing that by the third and fourth days of these four-day tournaments, the shallow-water stuff was picked over,” Rose says. “I noticed that people like David Fritts and other off-shore fishermen I watched on TV would catch five in five casts, while I was fishing all day for five bites. I knew the offshore game was going to be an advancement of the future, and I made a conscious effort to learn all that I could about it.”

Learn Rose did, and he’s willing to pass along some of what he’s learned. For starters, check out how he and Haynes rig their Rangers with electronics.

A. Transom Transducers
The dash head units are connected to a transducer on the transom. This is also where the StructureScan transducer, which includes SideScan and DownScan, is mounted.

B. GPS Receivers
Haynes’ GPS units all run off one receiver, which is mounted near the transom. Keep in mind that the trolling motor, with its transducer, is about 20 feet from the receiver, so occasionally it’s necessary to make adjustments when pulling up to a waypoint while standing on the front deck.

Rose uses two receivers – one at the stern and one installed on the bow by the trolling motor. He feels this setup allows for more accurate waypoint generation and fishing. 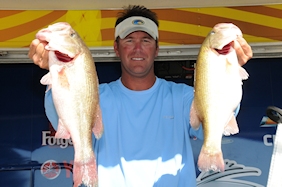 C. Batteries
Both pros suggest “thinking big” when buying batteries. Get the largest reserve capacity available. And don't scrimp on the number of batteries, either. Haynes has four in the boat –
three for the trolling motor and one for the depth finders and livewell, and for starting the big motor.

When fishing at the bow, one way to conserve battery power is to set the dash units to standby mode.

D. Dash Units
Each pro has two HDS-10 units at the dash – one installed into the dash and the second installed off to the right on a mount. These are the primary search tools.

One unit is split with the left- and right-side StructureScan views on one half and the DownScan view on the other half. The second unit is split between the GPS map and traditional 2-D sonar.

E. Ethernet Box
Both pros rig up Lowrance’s “little black box,” a well-designed device that allows StructureScan HD sonar to be distributed to three head units and to share waypoints across units. It can be
stowed in a compartment, usually near the console.

F. Bow Units
It used to be that the main function of depth finders was to find structure, not fish. But Rose and Haynes are way past that. They have multiple units at the bow to see what’s under them, to spot many of the fish they catch, and even to use multiple maps.

Together, the units provide a complete view of the “big picture.”

G. HydroWave
HydroWave units emit sounds that imitate forage fish and feeding predators that bass can feel in their lateral line and inner ear. The HydroWave is a source of speculative discussion among
many anglers. Does it help, or doesn’t it? Rose and Haynes have a HydroWave unit on their boats.

“You really don’t know if it helps, but it sure doesn’t hurt anything,” Haynes says. “It probably helps cover some of your boat noise, such as the transducer popping. If I don’t catch something, I’ll turn it on.”

Rose says he was skeptical of HydroWave at first, but after installing a unit, he rattled off five top-10 finishes, including a victory at Pickwick.

“Those were my first experiences with the HydroWave, and I was pretty much sold after
that,” he says. “I’m not going to sit there and tell you that if you put one on the boat, fish are going to jump in the boat and you’ll catch more fish, but I will tell you that you can get everything around the boat excited – the shad, the baitfish, the bluegill. You’ll start seeing your screen wake up.”

Both pros suggest experimenting with the unit. Sometimes it seems to make a difference, at other times factors such as boat positioning or crankbait selection take precedence. There is no “blueprint” for how to use it.