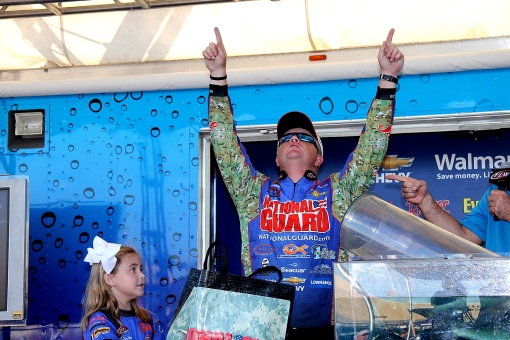 Wheeler Lake champion Mark Rose lifts his hands and head
to heaven for a moment of thanks. (Photo by David A. Brown)

DECATUR, Ala. – National Guard pro Mark Rose again brought the largest stringer to the scales Sunday – for the third time in four days – to win the Walmart FLW Tour Open on Wheeler Lake presented by Ranger Boats. Rose weighed in a five-bass limit worth 16 pounds, 14 ounces to win the $125,000 prize after leading wire-to-wire, besting the bass-fishing pros from all across the United States.

“I’ve been mad at these fish ever since I didn’t make the Forrest Wood Cup,” said Rose, who now has over $1.6 million dollars in career winnings with FLW. “That’s the Superbowl of our sport, and I want to be there every time. It was really tough for me to have to miss, so this is just a good cap for me on a tough year.”

Rose dominated the event by targeting mussel beds using a crankbait and a Texas-rigged worm. He also credited a green pumpkin-colored Strike King Football jig as catching the key fish for him Sunday, but said the crankbait was the key for him throughout this event.

“The fish were sitting in 21 to 23 feet of water, and it’s hard to get a lot of crankbaits down there,” Rose said. “I used a lot of different crankbaits this week. I’ve modified a few so I can really get down to those depths, and that was the key for me. The bigger fish wanted that crankbait more than anything else. When they weren’t eating my crankbait, I knew I could pick up my worm and really slow down and catch them. It took me some time to figure them out, but I eventually did.

“My key fish for me today came on the Football jig,” he continued. “I didn’t have any in the boat until I started throwing that. I also used a jigging spoon this week, because it can fire them up. It may sound weird, but I’m not always trying to catch one when I throw that spoon. I’ll use it to break them up and get them all fired up, and then I’ll ease my boat back and throw the crankbait. It’s like bed fishing, but 20 feet deep.”

Rose fished in two main areas throughout the tournament, around fifteen miles from the takeoff site. He was finally able to fish a third primary areas that he had located in practice on Sunday.

“I wasn’t able to get into one of my key areas the past couple of days because another guy had been fishing on it,” said Rose. “He had a really good tournament, but didn’t make the day four cut. I was finally able to fish there today and I caught three off of it.

“I made a conscious effort about four or five years ago to get offshore and I have to thank one of the best ledge fisherman in the country, Randy Haynes, for the time that he spent with me,” Rose went on to say. “He taught me a lot. I also want to thank the locals out on the lake today. There were a lot of people watching me, and they could have came out and hammered my areas. They left it alone for me, and I really appreciate them. First and foremost, though, I have to thank my Lord and Savior Jesus Christ. He means everything to me, and I want to honor him with every moment of my career and my life. On my truck it reads, Faith, Family, Fishing. That’s what it’s all about.”