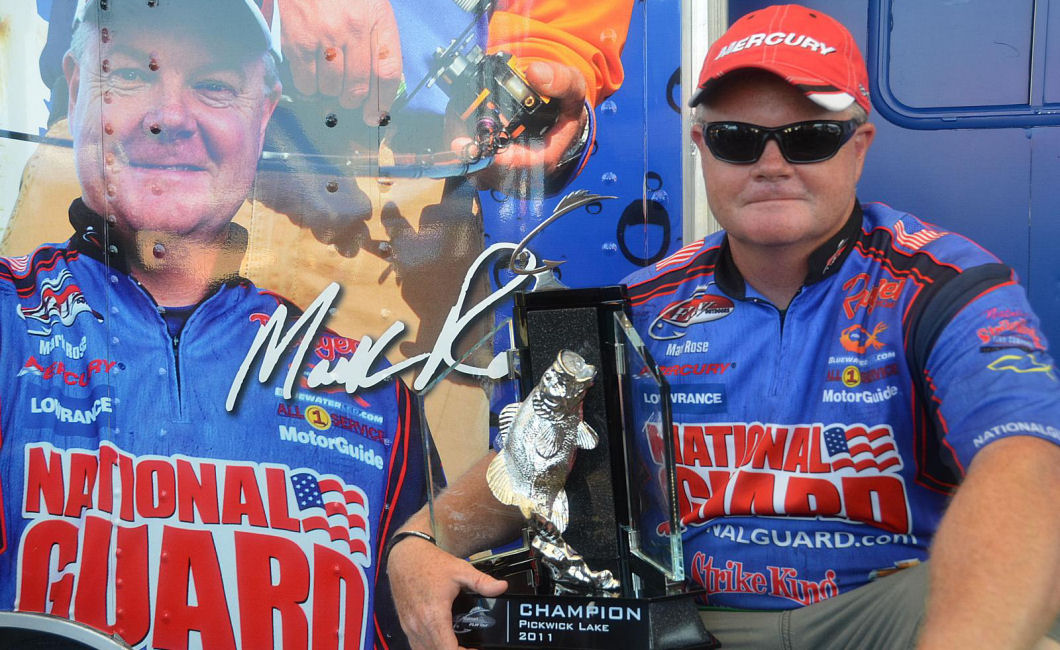 FLORENCE, Ala. – It’s official – Mark Rose of Marion, Ark., owns Pickwick Lake. After netting an FLW Series tournament title here in 2007 and scoring an EverStart Series victory on the same body of water in 2009, Rose added another chapter to his Pickwick Lake legacy by winning today’s FLW Tour title.

“I gave it all I had this week so it’s pretty exciting to win,” said Rose, who took home his first-ever FLW Tour title after holding down first place all four days of the event. “You can’t help but feel emotional inside.”

Out of Rose’s four FLW Outdoors’ titles, three have now come on Pickwick Lake. So what is his secret?

"Sometimes it kind of feels unexplainable,” he said. “About four years ago, I decided I wanted to learn a lot more about offshore structure fishing, and I had some buddies who really helped me out. I worked really hard at it over those years to get better. Now I really understand the current, the lake and what’s really going on out there. But it was a long, hard road getting here.”

And today was no exception. Holding down a 7-pound lead heading into the finals, it was clearly Rose’s tournament to lose. And amazingly enough, that’s almost what happened.

“At about noon today I really thought it was slipping away from me,” he said. “At that time I only had about 9 pounds in the boat, and it felt like I was fixing to blow a big opportunity.”

With time ticking away and his once-stellar bite gradually fading, Rose was hopeful he could turn it around. However, there were no guarantees. But just when everything seemed to be lost, fate intervened.

“With about an hour left in the tournament, I had already left my (primary) spot,” he said. “Then, finally, I saw some current coming around those buoys. As soon as I saw that I knew what to do. So I spun back around and raced 20 minutes back to a 25-foot deep hole I’d been catching most of my big fish on. When I got there, I caught a 5-pounder and two 3-pounders, and that’s what sealed the deal.”

Although Rose quickly dismisses his unofficial title of “ledge master,” there is no doubt that the Arkansas native put on a veritable clinic this week – from practice until the final day of competition.

“The spot I wound up winning the tournament on was a place I’d found on the very last day of practice,” said Rose. “I basically idled over to this waypoint that I hadn’t been able to check out until the last day, and when I spun my boat around, I found a 25-foot hole that had the mother lode. And that’s where I caught most of my fish this week.”

"I used a little bit of everything this week,” said Rose, who ultimately recorded a massive four-day catch of 77 pounds, 11 ounces. “Today was a little bit slower than it had been for me all week. But I never got nervous. I just decided to go out there today and do the best I could, and if I got second place, well, then it wasn’t meant to be.”

In the end, whether it was destiny, experience or a little of both, Rose is now the proud owner of his very first FLW Tour title – not to mention a nice first-place check totaling $125,000.