Rose Whips ‘Em At Wheeler Again, Wins By 12-Plus 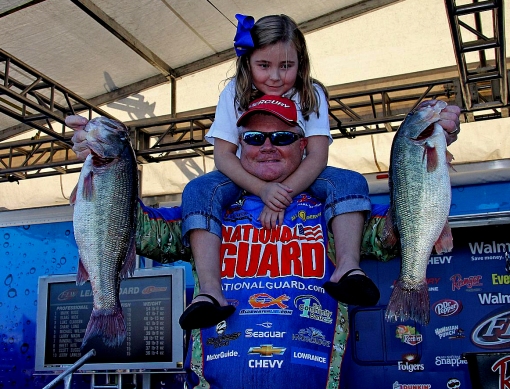 A Top-35 finish in any FLW Tour Major would be considered a good result in the minds of most pros. It comes with a decent paycheck and a good share of points in the Angler of the Year standings. Heck, six Top-35s in one year will send a guy to the Forrest Wood Cup.

Mark Rose isn’t most pros, though, especially when it comes to tournaments held on the Tennessee River, a body of water he considers his fishing nirvana. So when he finished 34th at the Kentucky Lake Major this past June, the usually even-tempered Rose got mad – at the fish – and circled the Wheeler Lake FLW Tour Open as payback time.

Rose took out his frustrations on Wheeler’s bass and the rest of the field this week and today, he closed out a dominant wire-to-wire performance with a 16-14 stringer, by far the best catch of the day, to finish with 71-06 and pick up his second career FLW Tour victory. He came into the final day with a 7-01 lead over 2nd-place Blake Nick and it was assumed everyone else was fishing for the runner-up spot. He never let up and wound up winning by 12-10.

“That was one where I feel like it slipped through my hands,” he said of his Kentucky Lake effort. “I’m not going to say that I feel like I’m going to win every tournament on the Tennessee River, but I certainly have a lot of confidence and I feel like I should’ve done a lot better than what I did there. I was mad at the fish in the Tennessee River and I felt like I needed some redemption and this one certainly helped get that.”

Even against a sparse field of 88 competitors this week, Rose showed why many consider him the best at picking apart the subtleties in offshore structure that always seem to hold the right kind of fish. With many of the finalists working Wheeler’s shallow water, Rose stuck to his strengths and plucked quality bass after quality bass off ledges, utilizing his electronics and executing to near perfection.

Here's how the final weights looked at the end:

The prevailing opinion among the pros entering the tournament was that the winning total would be somewhere in the 50- to 60-pound range. That would’ve been spot on had Rose opted to stay home in Arkansas for the week. By comparison, when the Bassmaster Elite Series came to Wheeler last June, David Walker won with a 4-day total of 63-10.

Some pros said the water had come down up to 2 feet in some places overnight and that took some shallow areas out of play. And while the fish are on the cusp of beginning their fall feeding migration toward the bank and up the creeks, Rose proved that if you can find a willing school of offshore fish on the Tennessee River, he’ll take his chances fishing that way any day.

One more Open remains on the FLW Tour schedule this year – at Sam Rayburn Reservoir in Lufkin, Texas, from Oct. 11-14. After that event, the Top 5 anglers in Open points will be granted early entry into next year’s Forrest Wood Cup at the Red River in Shreveport/Bossier City, La.

Rose On A Roll

Last week, Rose competed at the Arkansas River PAA Series event in Muskogee, Okla. He finished 3rd in an event that was won by Tommy Biffle, who seems to dominate just about every tournament on that stretch of water. Sound familiar?

Rose carried that momentum to Wheeler Lake where he hadn’t necessarily dominated, but it is a Tennessee River impoundment and BassFans know full well he’s typically the man to beat in any derby staged on that stretch of water.

Carrying a 7-pound lead into the final day, he arrived at the area that had produced all of his fish this week and got a sense that things were going to go his way again.

He initially had three specific spots dialed in, but had only been able to fish two of them the previous 2 days as another competitor was camped on the third. Today, he had the run of the place.

“I knew I had all three areas open and I pulled back in there and I could see all three areas from one spot,” he said. “Everything was calm and there were no boats around and I just had a special feeling when I entered into that creek this morning. There was just something about the day – the Lord just seemed to give me a peace about it that I was going to make this thing happen.”

The first spot he fished was where he’d caught his best fish this week, but he didn’t generate anything there. He then moved to the spot he’d been unable to fish and immediately put three 3-pounders in the boat.

“It allowed me to breathe a little bit and slowed me down and relaxed me,” he said

He moved on to third spot and finished his limit, and culled up through the day to sack up nearly 17 pounds."It feels real good (to win)," he said. "I got off to a rough start this year and missed the Cup by a point. It just seems like that ignited something in me, I don't know. It just feels really good to be on a winning streak and not just winning, but reading the water good and making good decisions."