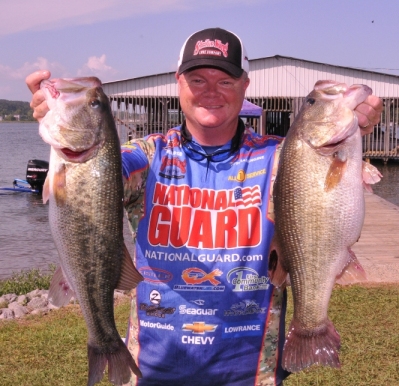 For a river rat like Mark Rose, raised fishing the shallow oxbows of the Arkansas and Mississippi Rivers, offshore structure fishing was initially a conundrum that he could avoid.

“I made a living for about five or six years as an old bank beater,” he recalled, referring to his early days as a tour-level angler. “But in the four day events, by days three or four, the ten laydowns I was beating on wouldn’t pan out. Then I’d go home and watch the TV show and saw guys like David Fritts. What I worked for all day he’d catch in 15 minutes.”

As his schedule increasingly featured waterways where offshore specialists prevailed, Rose had no choice but to attack his weakness head-on. Fortunately, he only lives a couple of hours from the TVA chain of lakes, ground zero for that type of fishing in the summer. The results are overwhelming: In 2007 he won an FLW Series tournament on Pickwick; in 2010, he won an EverStart Series event there; and in 2011 he won an FLW Tour Major on that same body of water. Clearly he’d overcome any reluctance to fish deep water structure. In fact, he’d mastered it.

While Rose has refined certain tactics in recent years – for example, a big flutter spoon — he attributes his growth as an angler to many days spent without making a cast.

“I’ve spent hours and hour and hours on the TVA system, idling around, seeing what I was missing,” he explained. “I’m still not an expert. I don’t think we’ll ever completely master it, but at a time when my career was starting to get in the doldrums, this created a newfound passion.”

Unfortunately for some aspiring pros, understanding your electronics is not something that can be achieved at home or in a classroom. “There’s not a book you can read,” Rose explained. “It’s all about the amount of time looking at it. Until you see critters on your unit or how a ditch lays out, you’ll never understand what shadows and dark spots and other markings mean.”

He recommends that novices start off by looking where they know schools of fish exist, to learn how they’re represented in pixels. Once that’s done, “you can find new schools on your own,” he said. “That’s when you’ll really get excited.”

The addition of Structure Scan to his Lowrance products has made his time on the water even more efficient, but has required an additional learning process. He’s used the newer technology for three solid seasons and credits it with helping him catch fish he might have otherwise passed by.

“Down scan is easy to read, but with side scan you have to relearn your boundaries,” he said. The technology is particularly useful in water deeper than seven feet, but Rose noted that even on clear-cut shallow waters like the Potomac River he’s used it to find shipwrecks, stumps and irregularities in the grass.

Now that he’s fully embraced the electronics revolution, Rose has four – yes, count ‘em, FOUR – big Lowrance graphs on his Ranger. There are two HDS-10s on the front deck, and both an HDS-10 and HDS-8 at the console. That gives him the flexibility to devote each screen to one job – for example, he might have two-dimensional sonar on one front unit and the other completely devoted to mapping. In some cases, he’ll even put in two different map chips to see little subtleties that one or the other might leave out.

That level of electronic outfitting may not be practical for the average angler, but in any case, Rose advised anyone looking to maximize their catch to “get the best you can afford.” Simply put, what was state-of-the-art 10 or 12 years ago is light years behind today’s mid-level units. With each minor bump in price, you’ll typically get a substantial improvement in the size of the screen as well as the number and quality of the features provided.