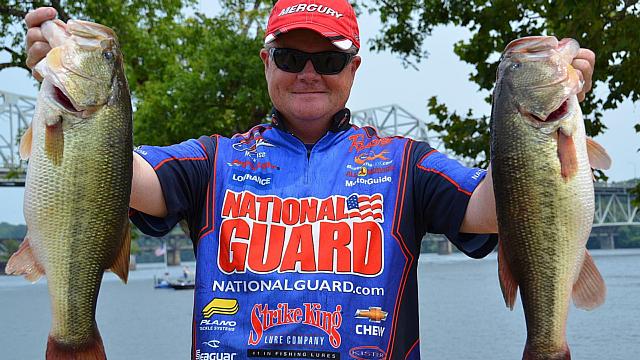 FLORENCE, Ala. – Bolstered by a catch of 24 pounds, 10 ounces, Mark Rose of Marion, Ark., put himself in perfect position to make a strong run at a tournament title on Pickwick Lake during the opening round of FLW Tour competition in Alabama. Boating one of only two 20-pound-plus stringers in the Pro Division, Rose clearly one-upped the competition, out-fishing his next closest rival by more than 4 full pounds – a rather astounding feat given the massive boat congestion and fishing pressure that comes with fishing Pickwick Lake in mid-July.

Not surprisingly, Rose couldn’t have been happier with today’s final outcome.

“I was able to put together a pretty good stringer early so that really helped,” said Rose. “I basically stayed in one place most of the day. It was a spot that was a little less obvious and I pretty much had it to myself all day. In fact, Chad Morgenthaler was the only other guy to come near it. I was fishing a ledge that dropped off into 22 to 24 feet of water and it was pretty productive.”

Rose said that he had a bunch of other areas loaded into his GPS unit but decided upon that specific location due to the intense fishing pressure that accompanied his other prime fishing locations.

“I’ve probably got 50 waypoints or more but I knew there was going to be a boat on every one of them so I tried to look for something different,” he said. “I just tried to find a place that everyone wasn’t pounding on. Eventually, I found this one area that was a little more obscure and it really paid off. Obviously, I’m very pleased with what I caught today.”

Rose said that given his practice sessions, he was somewhat surprised by just how well he did in today’s competition.

“I was just hoping for 15 to 17 pounds today and I told myself I’d be happy with that,” he said. “Overall, the fishing was slow. I would catch one fish about every 15 minutes or so. Toward the end of the day I picked up a crankbait and caught my two biggest fish and that helped me. The key to that spot was finding a fresh school of fish. I’m pretty sure all of those fish just got there. Honestly, I was tickled to death because I wasn’t catching that kind of weight in practice.”

In addition to fishing crankbaits, Rose said his main weapon of choice was a Strike King Shaky Head worm with a 3/16-ounce weight.

“When I picked up that Strike King Shaky Head, the fish just went crazy,” he said.

However, Rose’s banner day might have gone by the wayside had he not received a little help from a friend at the end of the day.

“Heading back to weigh-in my water pump got clogged,” said Rose. “But just then Greg Bohannan came by and helped me unplug it. I really can’t thank him enough. Without that help, I probably don’t make it in on time.”

Rose’s stellar performance in today’s competition also puts him in a great position to make a run at another prestigious prize as well – the 2011 FLW Tour Angler of the Year award. Heading into this competition, Rose was in fourth place, 33 points off the lead. Although it will be difficult to make up that much ground, especially since most of the other AOY contenders did well today, Rose accomplished exactly what he needed to do on opening day to remain in the hunt.