Rose is Angler of the Year 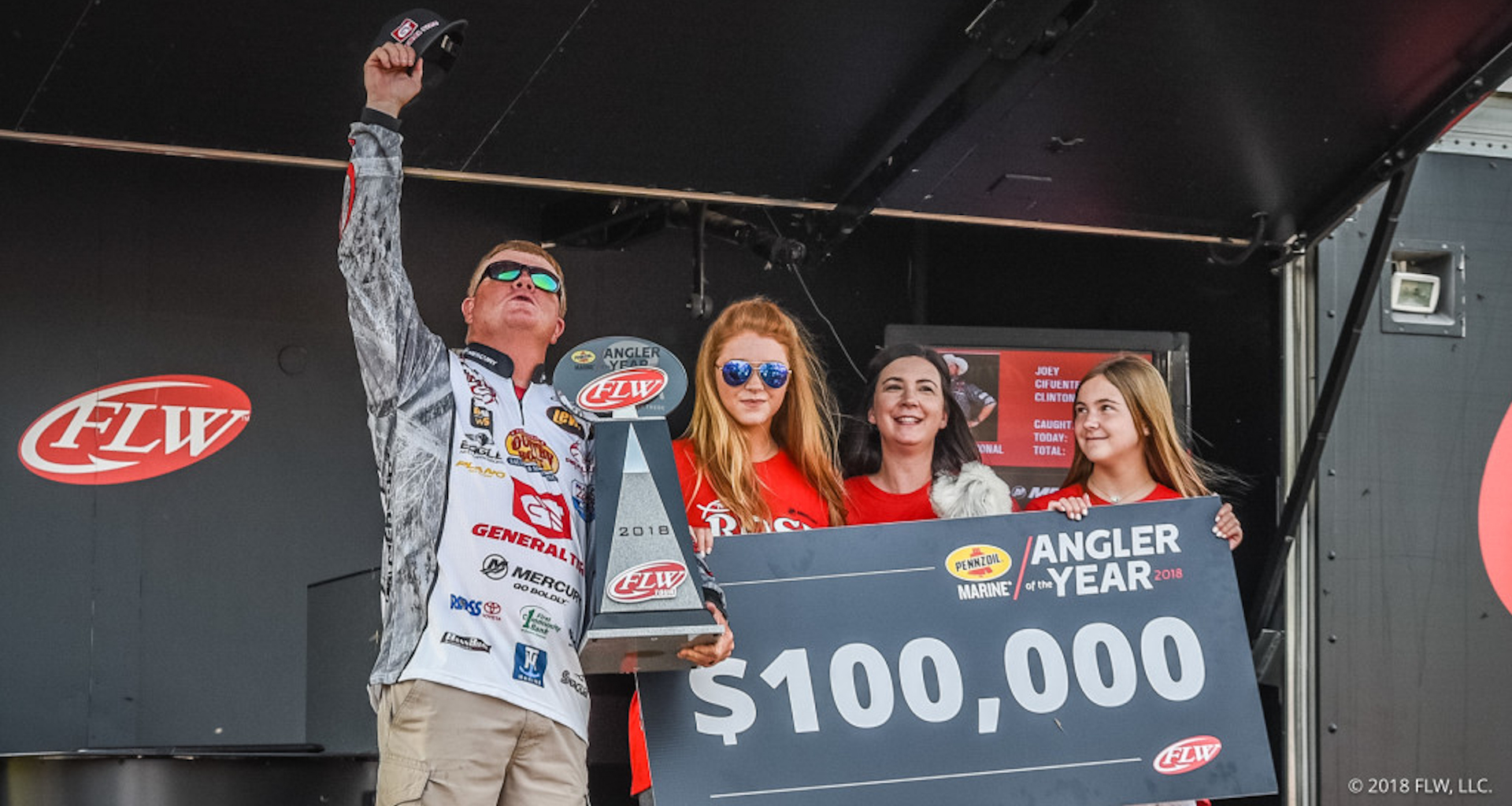 “Finally” is necessary to emphasize the relief that Rose felt after Scott Martin was bumped from the top 10 during today’s day-three weigh-in at the FLW Tour event presented by Mercury on Lake St. Clair. That Martin didn’t make the cut to Sunday meant that he could no longer catch Rose in the standings. When Joey Cifuentes weighed in and Martin dropped to 11th, the wait was over, and it became official: Mark Rose is the 2018 FLW Tour Angler of the Year.

Rose took over the lead in the standings at stop No. 5 at Smith Lake and was able to ride it out despite a mediocre 67th-place finish at St. Clair. He had a 64-point lead coming in and needed to finish 64th or better to guarantee no one could catch him.

Sixty-four places is a lot, but not really. Not on St. Clair, where 20 places can be separated by only ounces.

Rose knew that, and he knew it was far from a sure thing. And he was reminded about it often because, when you’re the AOY leader, everyone asks you about AOY. When you’re the AOY leader, bass writers crunch the numbers and figure the odds on whether or not you’ll win it. And when you leave the door open at the final tournament and have to wait it out on shore while Scott Martin, a former AOY himself, gets to fish on top-30 day, you’re forced to sit and watch and wonder about your fate.

That’s why, if you’d have seen Rose at the weigh-in today at Lake St. Clair Metropark, you’d have seen a nervous man. You’d have seen Rose sitting on a table off to the side of the stage next to his good friend Greg Bohannan, both his legs swinging back and forth, looking like a father-to-be waiting outside the delivery room while a very important part of his life is left completely out of his hands. Which was exactly the case.

Then again, if you could’ve gotten inside Rose’s head, despite the nerves, you’d have probably witnessed a surprising calm. The results of the AOY race weren’t in his hands; they weren’t in Martin’s hands either. Rose would tell you the results were in God’s hands.

His response each time he was asked about AOY over the last few weeks always involved the same line: “AOY won’t define me.”

That’s the message Rose shared all season long, and has throughout his career, and again today.

On the weigh-in stage, Rose recounted how he’d fished an FLW Tour event on the Mississippi River in 1999 and finished in third place. The success prompted him to quit his job with the Boy Scouts of America to focus on fishing professionally. The next tournament was at Lake St. Clair, where Rose finished 147th. That butt kicking was the first of many lessons that led him to this day and the AOY title on the shores of the same lake that served as his reality check 19 years ago. He says being a student of the game is how he’s been able to stay competitive against the sport’s best.

“I know I might’ve gotten more points than anybody else and won the money, but Bryan Thrift and Scott Martin are anglers of the year, and they’re there every year,” says Rose. “I don’t know that AOY is the best angler every year. I like to think it is this time. But there are people in this sport that day in and day out are really great, so it’s hard for me to say I’m the best.”

Rose’s season included five top-30 finishes and two top 10s, but when he looks back on 2018, Rose will probably remember a gutsy comeback at Kentucky Lake and the gut-wrenching wait he had to endure here at St. Clair.

At Kentucky Lake, Rose caught only four keepers for 12 pounds, 4 ounces on day one. He said then that he’d let the invasive carp that have proliferated in Kentucky Lake get into his head and distract him from his job. He righted the ship on day two and caught 17-15 to make the cut, then charged ahead through the weekend to finish fifth. He went from a potential “former AOY leader” to a clear AOY favorite.

Then came St. Clair and the down time in between.

“Coming into this tournament I had a long gap between Kentucky Lake and here,” Rose says. “I know how this place fishes. I know how tight the weights are. I knew I could catch 16 pounds a day and not complete what I needed to complete. A venue like this is tough. I missed out on sealing the deal [on Thursday] by 1 ounce, because that was the difference in four places.”

The time off in between is when Rose felt the nerves start to build. He didn’t dismiss his desire to win AOY, but instead he game planned for St. Clair with the points race in mind. In a situation like that, a potential prize like AOY can become a distraction.

“I came here to St. Clair and went and gave it all I had,” says Rose. “I knew if I stayed consistent I would have a good chance. I wasn’t able to seal it [on Thursday], but thank God it was enough.

“I decided to play the average game. I thought I could cull up to 18 or 19 pounds. I thought that would do it, and boy was I wrong. I had 38 pounds, 6 ounces and couldn’t do it [on Thursday]. I fished a little too conservatively. But then again I broke one off and lost a couple, so that was three fish I could’ve had. So I had opportunities. My strategy was good, but I should’ve put my foot on the gas. That’s really what I’ve always been pretty good at doing.”

Today he added FLW Tour Angler of the Year and its $100,000 payday to his resume. He was joined on stage by his wife, Christi, and his daughters, Natalie and Hannah Grace, and handed one of the two trophies he previously lacked in his career.

The other, of course, is the Forrest Wood Cup.

When asked about his thoughts on winning the Cup, which happens to be in his home state of Arkansas on Lake Ouachita in August, Rose smiled for a moment, showing his excitement only briefly, then returned to his usual stoic self.

“Again, it doesn’t define me, but I’ll be at Hot Springs and every other championship, doing my best until my Lord calls me home. And if a Cup title is the Lord’s will, then I’ll win. And if not, I don’t want to win.”