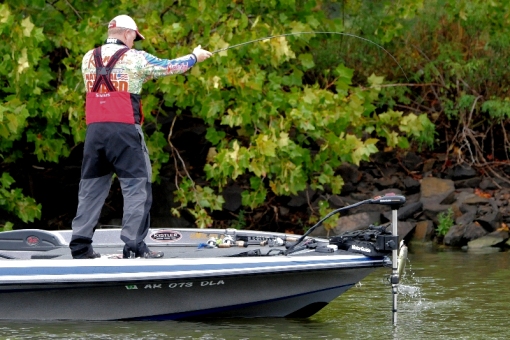 Mark Rose, who entered the final day in 2nd place, finished in 3rd place after weighing a 12.51 pound limit on Saturday to boost his total weight to 38.64 pounds.

Locking down one pool, Rose said that he spent the majority of the tournament in the largest creek that he could find. “I fished grass and just kept looking for one really big bite,” he explained. “I had several milk runs where I could catch smaller fish, but I really tried to stay in the areas where I thought that I could get the bigger bites.”

Keying on water-willow and bank grass in less than three feet of water, Rose relied on a Strike King KVD 1.5 crankbait in Pearl/Black Back and a 4.5” Strike King Coffee Tube in Black Neon. “There were a lot of little targets where there wasn’t any bait, so I sought out the targets that had more shad holding nearby,” he concluded.

read the entire article on fishpaa.com