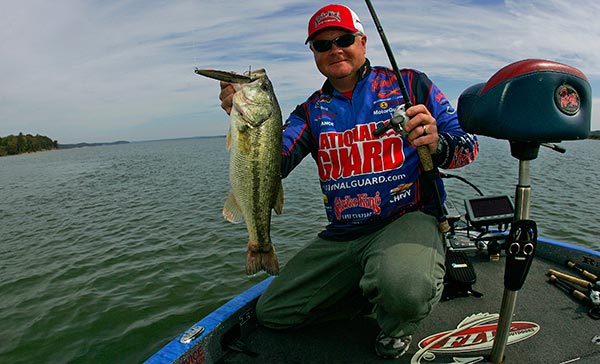 It's the day before a big tournament, and you're beginning to get a little nervous. The horizon is littered with bass boat silhouettes parked on offshore humps, river ledges and rock piles. The bass are deep and you know it, which brings up one small problem: You feel totally lost fishing depths greater than 12 feet.

In a last-ditch effort, you venture offshore and into the unknown. As you idle over a river ledge you look up and see the squiggly lines on your graph. But cast after cast with every lure in your boat – nothing is fooled by your multiple offerings.

Sound familiar? This is one of the most common frustrations among tournament anglers across the country. Don't let deep summertime bass intimidate you. If you can see them on the graph, you can usually catch them.

Strike King pro Mark Rose honed his  deep water skills to locate and catch deep bass over a period of several years. He worked with local anglers who were known for finding big schools offshore then spent every waking moment traveling to fisheries that held big schools to practice relentlessly until he was comfortable finding bass and then catching what he found. He recently shared some of his favorite equipment and lures he uses to find 'em and fool 'em. 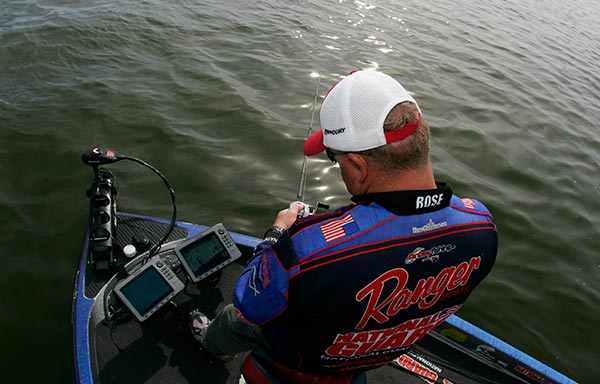 With the modern technological advancements from Lowrance in sonar, down scanning and side scanning technology, finding bass has never been easier. Don’t think, however, that just because an angler has a cutting-edge graph, that fish will jump into the boat. It’s all about practice, patience and time on the water.

Throughout his travels, Rose receives numerous questions about his big electronics, and with good reason. With three graphs mounted on the bow and two graphs on his console, it is truly a sight to behold. The graphs aren’t just cool-looking; each has a very specific purpose.

When searching for fish, Rose relies on two console-mounted Lowrance HDS units. The flush-mounted HDS 8 is used for a split-screen view between side and down imaging, while the HDS 10 is used solely for mapping and sonar purposes. In most offshore scenarios, Rose keeps the side imaging range set at 80 feet for maximum image clarity. In situations that call for shallower idling, such as graphing long, tapering points, it is best to decrease the range in 20-foot intervals to optimize detail and visibility.

He'll just keep idling ledges, breaks, humps point and more until he starts to see fish grouped up on his graph near the bottom. Once the fish are located on the console graphs, the bow-mounted graphs take center stage.

“My bow-mounted graphs are really a two-part deal,” Rose said. “My two HDS 10s allow me to view my full-screen Navionics map on one screen, while looking at my 3D map on the other. I’ll usually split-screen the 3D map to view the sonar or down imaging screen. If I want to look at a Hot Spots or Lowrance map, I have a flush-mounted HDS 5 for that.”

If you think multiple bow-mounted graphs seem excessive, think again. During the summer, offshore tournaments can be won or lost by just feet. You can have fish ganged up just 10 feet down from where you're fishing and never get a bite.

“I like to be able to look at different maps while I’m on the water,” Rose said. “Detail is everything. Navionics, Lowrance and Hot Spots maps are all great maps, but no two are the exact same. I need to get all the information I possibly can in order to get an accurate portrayal of the surrounding water.”

When it comes to the more advanced settings on his posse of graphs, Rose prefers to keep things simple.

“Believe it or not, I keep my graphs at their factory settings,” Rose said. “The guys at Lowrance know a lot more than I do. I don’t mess around with it much. It’s important to avoid getting too caught up in settings. You just have to get out there and study the fish.”

If you look inside any old timer’s tackle box, there is a good chance a few spoons litter the trays. Being one of the most old-school, proven baits in the fishing industry, the spoon can catch fish when other baits can’t. For this reason, Rose often uses them and has become one of the most well-known spoon fishermen in the country.

“I love casting a flutter spoon when the fish are really active,” Rose said. “The only flutter spoon I will throw is the Strike King Sexy Spoon. I throw the sexy shad color at all times because the fish tend to key in on the action of the spoon a lot more than the color. It’s not just a big piece of brass. It has an incredible cradle action when you allow it to fall on a slack line, with water displacement similar to that of a crankbait. ”

The retrieve of the Sexy Spoon is of the utmost importance. After a long cast, allow the bait to sink to the bottom and follow with a series of quick rips. In order to properly imitate a dying shad, a slack line is absolutely essential. While you may be able to catch a few bass letting it fall on a tight line, you are actually eliminating the very action that has made the flutter spoon so popular.

“A tight line is the biggest mistake you could ever make when you’re spoon fishing,” Rose said. “You have to have a completely slack line, no matter the situation. Don’t worry about detecting a bite, either. I promise you are going to feel the bite. Don’t let anybody tell you different.” 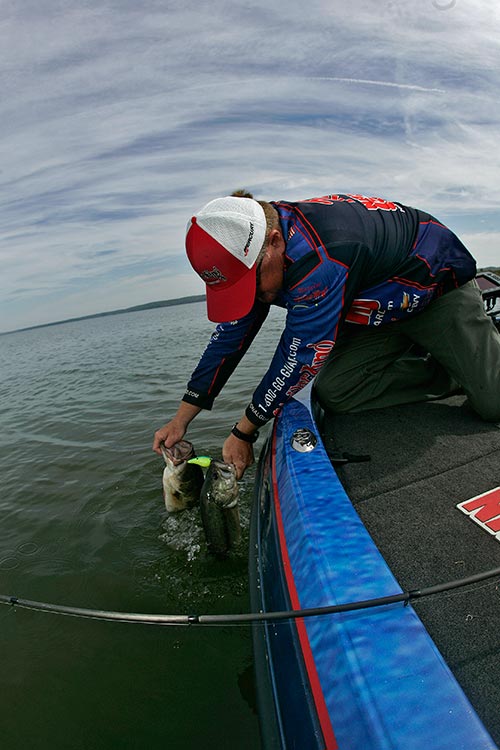 When deep summertime bass are in depths of less than 20 feet, whether active or inactive, a deep diving crankbait is always the first bait Rose throws. While the deep crankbait does wonders on active fish, it can also serve as a wakeup call to the inactive bass.

“I always like to feel things out with my one-two punch -- the Strike King 6XD and 6XD Silent,” Rose said. “If they’re turned on, it is not uncommon to catch multiple bass on one cast. If they’re inactive, the vibration of the crankbait will oftentimes light the school on fire. When I find bass, especially smallmouth and spots, feeding on smaller forage in the 15-foot range, the new 5XD is unbeatable. ”

While it is relatively easy to get caught up in the hundreds of possible color selections of deep cranks, it’s actually a simple decision. Throughout the summertime when bass tend to be less active, natural colors, such as sexy herring and root beer, are more desirable than others. In the spring, however, when fish feed more aggressively, loud colors tend to fool more bass.

With the outstanding castability of the deep crankbait comes a ton of tiresome reeling. To combat this, Rose prefers a steady retrieve on a 5:1 reel.

“The retrieve doesn’t really play a huge part in deep cranking,” Rose said. “I reel at a moderate pace, because reeling too slow can result in inefficiency, while reeling too quickly can lead to a few missed bites and some really sore arms. 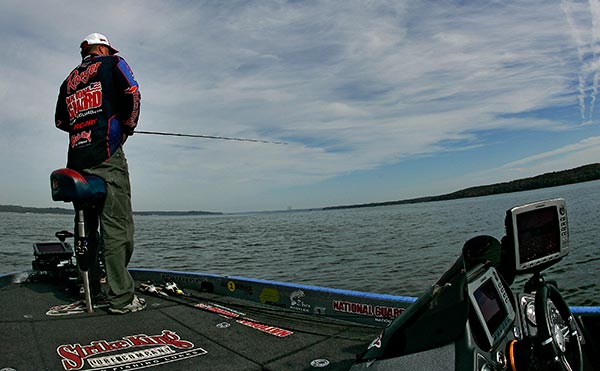 In the past few years, the fishing industry has witnessed a major migration towards the football jig. Its efficiency and undeniable fish-catching properties have made it one of the favorite deepwater baits for many professionals. If you’re an efficiency guru, the football jig is right up your alley. Instead of having to continuously thread worms onto a Texas rig, the football jig keeps trailers intact for more bites, increasing the number of casts in a day.

The football jig does its best work when the bass are relating to the bottom. Rose prefers a very specific jig for every situation.

“I’ll throw any color, size and type of football jig as long as it’s a 3/4-ounce green pumpkin Strike King Tour Grade football jig with a Strike King Rage Craw trailer,” Rose said. “It is the best football jig combo on the market, hands down. Strike King combined the perfect hook, positioned just right, with the perfect weed guard. The line tie is very tight allowing for great hooksets, while protecting your line from mussels and rocks. In really thick stuff, sometimes, I’ll downsize to a 1/2-ounce football jig to provide more protection from hang-ups.”

The football jig works best when hopped or dragged slowly along the bottom, emulating a fleeing crawfish. When setting the hook on a football jig, many anglers make the mistake of setting the hook upwards instead of in a side sweeping motion like a Carolina rig. To make these sweeping hook sets easier, Rose turns to his trusted 7-foot, 1-inch medium-heavy Kistler Z-Bone and 15-pound Seaguar InvizX fluorocarbon.

The big worm is an all-around big fish bait that has won countless tournaments around the world. When bass are slightly suspended off of the bottom and short-striking moving baits, or when the water is at its hottest temperatures, a big worm should be your first choice.

“My biggest secret for a big worm is to ditch the Texas rig,” Rose said. “There is nothing more unnatural-looking to a bass than seeing a big bullet sinker sliding up and down your line. Even if it’s pegged, the shape is totally wrong for mussel beds and rocks.”

In place of the traditional Texas rig, Rose rips the skirt and weed guard off of a 3/4-ounce Strike King Tour Grade football jig and goes to town.

“I still fish it just like a Texas rig, but the jig head just gives it a little different profile,” Rose said. “A 10-inch Strike King Rage Thumper Worm will usually catch ‘em if they’re down there. The best color I’ve found is plum crazy, because it combines the best of both worlds -- plum and green pumpkin.”

Because a strong hook set is required to penetrate the big worm with the hook, Rose prefers a slightly longer, 7-foot, 3-inch medium-heavy rod for big worms as compared to the football jig.

Summertime fishing frustrates many anglers without a doubt. Between the sweat, boat traffic and deep bass, sometimes the bass need extra coaxing to wake up as does the angler. If an angler locates bass with their electronics, a big spoon, deep crankbait, football jig or big worm should tempt some nice bass and  make for some fine fishing in the process. Take the time to idle a lot of contour changes offshore and then throw on them with this lineup of baits and before you know it, you're going to be catching bass with regularity like a pro.