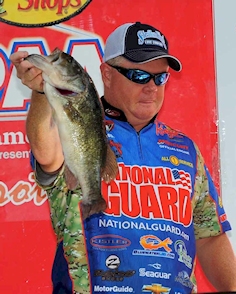 Gadsden, AL - Over the course of his career, Mark Rose has become a force to be reckoned with on river fisheries.

One would think that Rose would be right at home on Neely Henry Lake, which is one of the seven impoundments on the Coosa River, but Rose has discovered that the fishery has some key differences from other river impoundments throughout the country.

“Water clarity and where the fish like to position are two of the big differences,” Rose explained.

“The water color here has a little bit more of a stain to it, even on the lower end.   Because of that, the fish don’t hold as deep as they do on other river systems.  These bass feed more on shallow flats here than they do on TVA fisheries.  The schools will still be holding adjacent to ledges, but they’re feeding up on top in shallow water.”

Even with 100 degree days and water temperature eclipsing the 90 degree mark, many of the competitors fishing in the Bass Pro Shops PAA Tournament Series presented by Carrot Stix this week on Neely Henry have found that the better bites are coming from shallow water.

“I’ve spent a lot of time looking for those big spotted bass holding in deep water, but I just can’t find them,” said Rose.  “I graphed deep water for the majority of my practice, and I did the same thing the last time I fished here.  For some reason, I catch the bigger and more aggressive spotted bass as I fish shallower.”

While the water color contributes to the spotted bass’ affinity for skinny water in mid-summer on Neely Henry, Rose also has another theory.

“On certain portions of the Mississippi River where I grew up, there are natural springs that come up from the bottom and the fish like to lay their bellies right on those springs.  My only guess is that the springs may be shallower here, and that’s why the fish like to get up in just a few feet of water during the heat of the summer.  Honestly, I really don’t know why they’re up there.”

Rose enters Friday on Neely Henry in 23rd place after bringing in a limit weighing 11.33 pounds on Thursday.  He is currently 1.17 pounds outside the top 15 cut, and will need a solid effort to move up in the standings and fish on Saturday.

“I’m going to fish more my style of fishing today,” said Rose before launching his boat on Friday morning.  “I’m going to fish out a little bit more, but I’m still going to be fishing in water that’s less than 10 feet deep.

“When you’re looking for schools of fish, there’s a chance that you can find the mother lode,” he continued.  “You never know when you might catch two big ones back-to-back.  The only exception will be if some clouds and rain move in – then I might just pick up a spinnerbait and go fishing.”