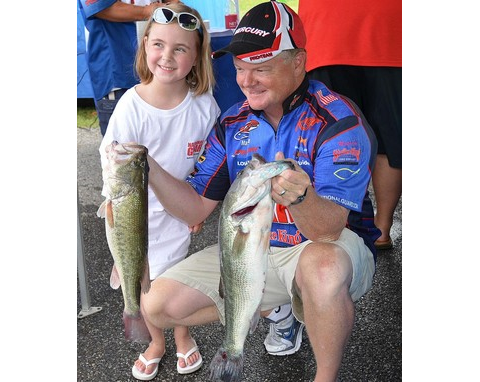 National Guard pro Mark Rose of Marion, Ark., added yet another top-10 finish to his already-impressive FLW record, sacking the heaviest pro limit of the day – 12 pounds, 11 ounces – to give him a three-day total of 43-4 and the runner-up finish worth $32,553. Despite falling short of another tournament win, Rose was a good sport.

“I’m very proud of John,” Rose said, adding that he didn’t buy into some of the negative comments he heard earlier in the week regarding Cox’s unorthodox method of accessing his secret fishing hole, including the lightweight boat. “He utilized it real well and did his homework. I hope he wins.”

As far as the fishing, Rose stuck to the same small oxbow in Pool 5 all week.

“It’s a grind out there,” Rose said. “I caught all my fish this week on a Strike King KVD 1.5 (crankbait) and a Strike King Premier Pro-Model spinnerbait.”

Though Rose had said earlier he knew the rest of the field was “fishing for second place,” it didn’t stop him from getting excited Sunday as he put together his best tournament day on the Red River.

“I was fired up,” he said about landing his two kicker fish today. “It’s just been such a grind that that was a positive moment … and that’s what you ned to keep the momentum going. Otherwise you’re just getting sunburned and bored.”