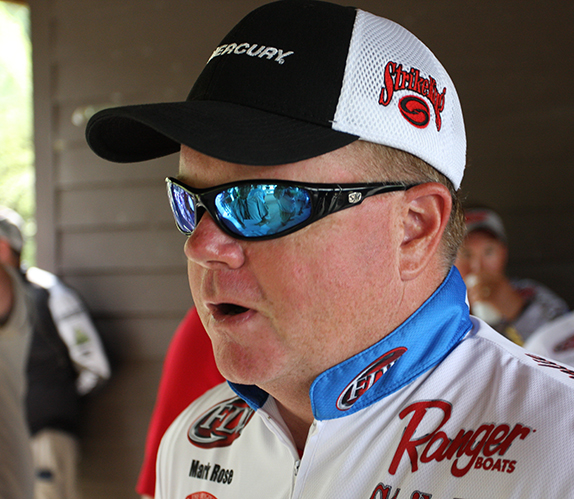 Mark Rose said he was simply unaware of the specifics of the rule he violated on day 2 of the Beaver Lake FLW Tour. His weight for the day was disqualified and he ended up with a 142nd-place finish on the basis of his day-1 bag alone.

When Rose's boat became inoperable due to a mechanical issue en route to the weigh-in, he and co-angler Nick Loeffelman Jr. flagged down pro Cody Kelly and rode with Kelly and his co-angler back to the launch in Rogers, Ark. The violation occurred when they left Rose's boat unattended on the water.

FLW Tour Rule 13, which primarily deals with permitted fishing locations, also contains language regarding breakdowns. The applicable portion reads: "Abandoning a boat and leaving it adrift without proper tie-off or anchoring after a mechanical failure may result in disqualification of that day’s weight."

Said Rose: "We were coming in and we were pushing it to the last minute and we were still about 10 minutes out when we (broke down). Cody Kelley was the only boat behind us, and I just want to express how much I appreciate him stopping. We figured we had just enough time, and we both jumped in his boat in the heat of the moment. There was no intent to break a rule – it was a last-second decision and it turned out to be the wrong one.

"In all my years of bass fishing, when you break down you and your partner have to ride in with another competitor. Evidently that rule (regarding a boat left adrift) was changed last year or the year before."

He originally thought the issue was his lower unit, but after a visit to the service trailer it was determined that the problem was a hole in the diaphragm caused by the ethanol that's added to fuel.

"I'd recommend everyone use a Lucas Oil ethanol treatment. I use it, but probably not every tank. It'll be every tank from now on."

Rose was forced to release a limit that he estimated at 8 pounds – the same amount he'd weighed the previous day. He wouldn't have finished in the money, but the error cost him approximately 60 places in the standings and a lot of valuable Angler of the Year points.

He felt badly for Loeffelman, who had three quality fish and likely would've gotten a check.

"It was certainly costly, but I just want to encourage people, when something like this happens, to lean on their faith and work hard, and what's meant to be will happen. But it sure does sting.

"It was a mistake that I won't make again."